Saturday, January 28, 2023 at 3:00 p.m.
Pantages Theater
Tickets: $19, $39, $56, $72
Subscriptions on sale now!
Contributor Single Tickets on sale July 13
Single Tickets on sale July 19
Ailey II is universally renowned for merging the spirit and energy of the country’s best young dance talent with the passion and creative vision of today’s most outstanding emerging choreographers. Founded in 1974 as the Alvin Ailey Repertory Ensemble, the company embodies his pioneering mission to establish an extended cultural community that provides dance performances, training, and community programs for all people. Under the direction of Sylvia Waters from 1974 to 2012 and Troy Powell from 2012 to 2020, and now under the direction of Francesca Harper, who trained at The Ailey School and who has choreographed for both Ailey companies – brings fresh perspectives to Mr. Ailey’s legacy, while nurturing new creative voices and propelling the Company forward. Ailey II has flourished into one of the most popular modern dance companies, combining a rigorous touring schedule with extensive community outreach programs. Dance Magazine calls Ailey II “second to none,” and The New York Times declares, “There’s nothing like an [a performance] spent with Ailey II, the younger version of Alvin Ailey American Dance Theater.” 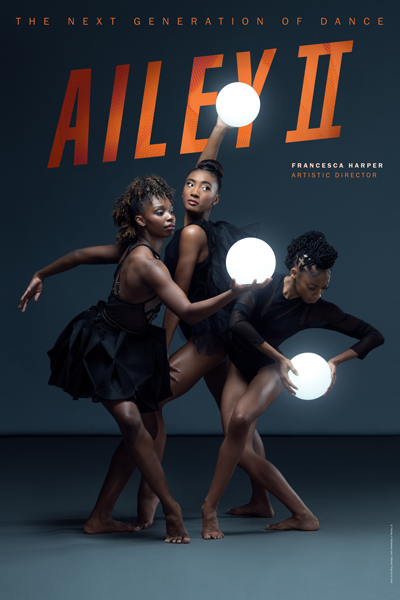 “The entire company looks terrific. Clearly, the future is theirs.”
— The New York Times