An Inconceivable Evening with Cary Elwes

Sunday, September 25, 2022 at 7:30 p.m.
Pantages Theater
Tickets: $39, $49, $64
VIP Tickets: $150
Subscriptions on sale now!
Contributor Single Tickets on sale July 13
Single Tickets on sale July 19
A limited number of VIP tickets are available and include the best seats in the house, a Meet and Greet with Cary Elwes, and a signed copy of his best-selling book, As You Wish: Inconceivable Tales from the Making of The Princess Bride.
Join Cary Elwes (Westley) for a behind-the-scenes look at life on and off the set of the classic film, The Princess Bride. After a screening of the iconic movie, Elwes will engage in a moderated discussion revealing never before shared secrets and tales of inconceivable antics!
Journey back to the lands of Florin and Guilder in an adventure filled with fencing, fighting, torture, revenge, giants, monsters, chases, escapes, miracles, and of course, true love.
Elwes has been in a multitude of films and tv shows, including Robin Hood: Men in Tights, Bram Stoker’s Dracula, Saw, Twister, Liar, Liar, Stranger Things and The Marvelous Mrs. Maisel. He recently starred in Guy Ritchie’s Five Eyes and just wrapped Mission Impossible 7 with Tom Cruise. Now Elwes is sharing with fans the personal stories behind the making of this piece of cinematic history.
Don’t be a “Humperdinck,” make haste for a night you will always “tweasure”! 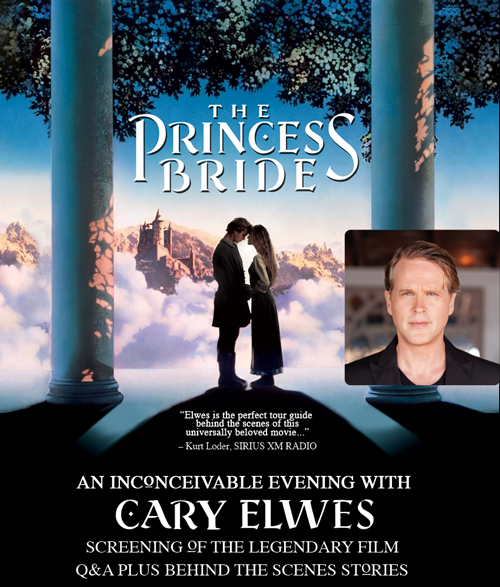